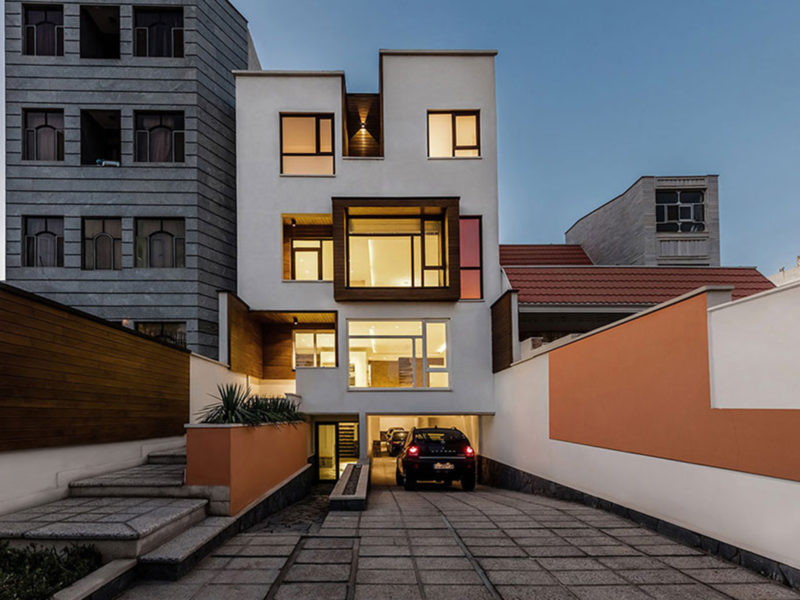 L.E.D architects have won this prize two other times previous. the first time Chasht Restaurant won first prize of 8th Iran Interior Award in 2015 and the second time Navid Pharmacy won the 2nd prize of 9th Iran Interior Award in 2016. Jaun Apartmet was selected as 5 finalist of Archdaily Building of the year 2017 and was selected as finalist in Memar Award 2016. Recently Juan Apartment was shortlisted in 2A Asia Award.

The Juan Apartment is located in infill site with 37 meters in length and 7 meters in width. The municipality rule minimize the program to 4 stores residential building which is located in 60% area of the north side of the site.The client was the young couple living with their son, who wanted an apartment in an urban infill site. On one side the housekeeper wife desired a palace! And on the other side the dentist husband wanted three separated units to get three mortgages. Besides, he wanted the first unit for living, the second want for rent, dental clinic or a showroom for dental instrument and the last one for the guests come from the other cities and stand for several nights with the client family. It’s clear that the son wanted a house to play. Due to The municipality rules, just 60% of northern side of the site area was constructed and the 40% southern remained area was left for landscape and courtyard. As a consequent the direct lighting just could possible from southern façade.
The primitive design program was followed as the order below:
Unit A assigned to the family living, the unit B assigned to an apartment unit for rent which may will use for dental Clinic or a showroom for dental instrument and devices in the future, and unit C assigned for guest who come from another city to visit the family and stay in their apartment for a few days. To meet the clients need, designer decided to design three units which rise among together instead of designing three flat units. Beside, Due to narrow width of the site and lighting matter the units integrated between together in height.
Placing on top of each other (unit A as a triplex and unit and B as a duplex unit) make maximum efficiency of space and direct lighting for each unit. All units benefit the direct lighting from southern façade. The patio at the end north of the site make lighting possible for bedrooms. Also the skylight make direct lighting for private hall at the second floor of the unit A.
Besides, by changing the height level in each unit, the private part is isolated from the public part. The void between these two parts is distinguished by changing the material. Complicated integrated space of the apartment making it too unique to sell in the future. Designer decided to use separated steel structure for void which will be modified easier than concrete one. By this decision, these three separated duplex, triplex and flat units will transform to three separated flat units. In the future.
The steps in landscape as an access dedicated to Unit A. The ramp in landscape lead to entry lobby which provide the access for the units B and C. in this fashion, each units have their own entrance which make more independency for each one.
All the above is completely based on municipality rule however architect played with the rules and translated to new order. Design strategy represent a method to how can an apartment be similar to home which is reflected more private and good feeling of ownership and independenc.